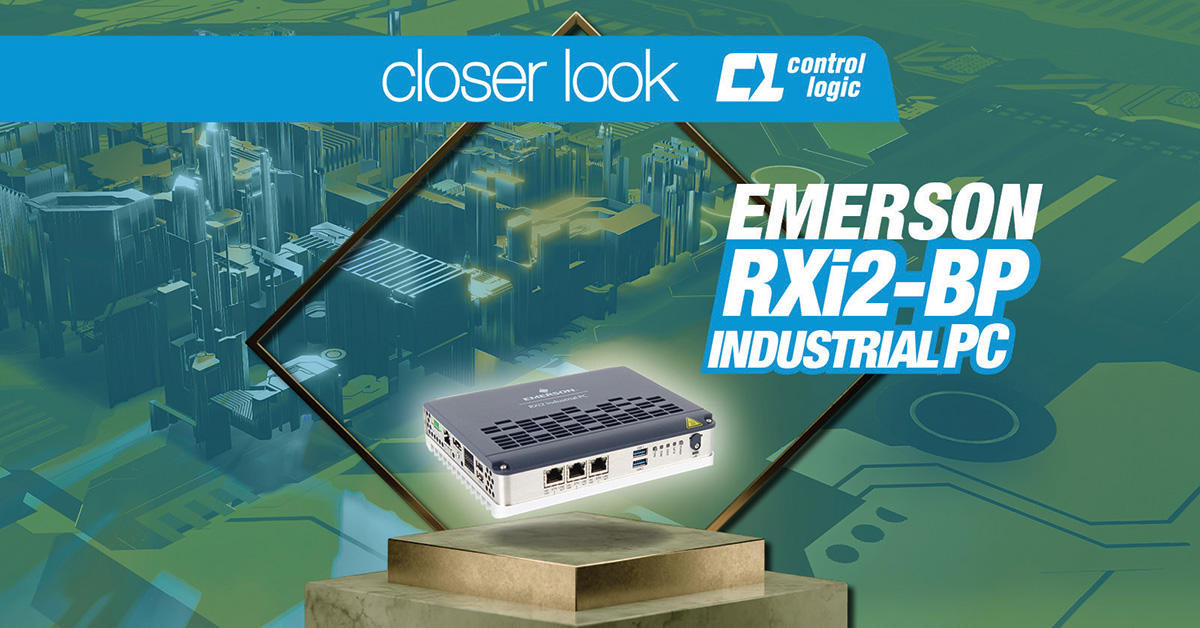 Over the last few years, Emerson has been expanding their portfolio of Industrial PCs designed for harsh environments. Touted as the “Next Generation of Ruggedised Computing”, Emerson has released the RXi2-BP, which offers new processor choices, increased and faster storage, improved graphics and enhanced security features.  You can expect mid-to-high performance computing functions for data processing at the field level in a compact footprint. It certainly looks promising with specifications easily capable to handle high volumes of data in various industrial applications.

I’ll start off by saying, it’s a lot more compact than first anticipated. While computers these days are getting smaller and smaller, it is always a nice surprise to see our industry building computers for industrial environments this tidy. Specifications mentioned earlier are impressive, and contains an AMD Ryzen V1000 quad-core processor, ranging from 2.0 GHz to 2.4 GHz depending on the model, and up to 16GB of RAM for fast processing of data in the field. Running data analysis, Historian software and HMI systems is achievable right at a machine. This is ideal for real-time insights into operations and streamlining process control.

In this test, we have the high-end 2.4GHz model with 16GB of ram and 128GB SSD Storage. We see four Gigabit Ethernet ports, alongside RS-232 and RS-422/RS-485 serial ports with the option to utilise a cellular modem, WiFi or Bluetooth wireless connectivity for data communication. The RXi2-BP IPC architecture is also based on Emerson’s rugged COM Express modular CPU platform.

The RXi2-BP comes preinstalled with PACEdge and is based on  LINUX OS. This means the bootup process is lightning fast. Our demo unit had already gone through the initial setup, so we are only prompted with an IP address to access the PACEdge web server, and a login prompt for Linux. After navigating to the Web server’s IP address (from a locally connected PC) we are greeted with an easy-to-navigate Web display with buttons for useful IoT Applications such as NodeRed, Grafana, and Portainer to name a few. This suite of Apps is an excellent starting point for any IoT Application and would be perfect for creating an IoT Application without a lot of knowledge of IT systems and the need for cloud-based servers.

All aspects of the RXi2-BP IPC have been engineered for reliability in harsh environments. Its rugged design, and more impressive, its fanless operation help reduces moving parts, reducing the risk of dust ingress that leads to overheating.  It features patented thermal monitoring technology, to see the RXi2-BP operate between -40º and +70ºC. This all leads to a better than average lifespan, improved reliability, and a cheaper cost of ownership. Tick, tick, and tick! External sources such as enterprise, ecological and environmental databases via the Industrial Internet can easily be leveraged by placing the system next to or near the machine to optimise control processes.

Emerson’s state-of-the-art PACEdge software helps here. Through time-series, data logging is incredibly easy and allows for simple remote monitoring including diagnostics information that can be shared at any time and anywhere. Inbuilt security features allow for safe de-segregation of operational data and networks that communicate easily with higher-level IT and cloud solutions. Multiple cloud vendors can be connected, to either pull data, combine with control system data or push to a different cloud vendor.

As more data is produced by automated machines and systems, the more powerful these PCs need to be able to handle the quantities of data and provide pre-processing closer to the source of generation. It is for this reason that industrial edge computing has grown in popularity, and it’s a factor behind the RXi2 series’ high performance. Combining outstanding compute capabilities with a compact and robust enclosure, the RXi2-BP is ideal for a range of demanding industrial applications. When paired with the PACEdge software, the limits of what was previously possible for edge deployed IoT Platforms have been opened up and it will be exciting to see what can be done with this platform in the near future.